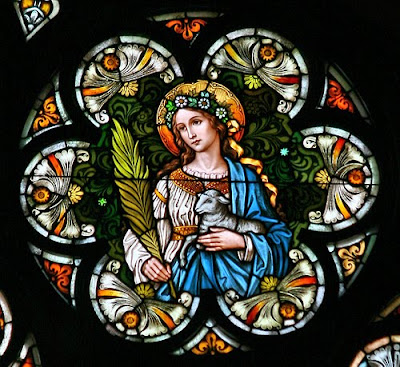 (photo credit)
St. Agnes is one of my favorites and is a member of my family via one of my daughter who names this beautiful virgin martyr as her confirmation saint.
January 21 is the memorial of St. Agnes of Rome in the Catholic Liturgical Calendar. Saint Agnes was 12 or 13 when she refused to marry the son of a Roman prefect. She was then condemned to death by that prefect, but Roman law didn't allow virgins to be executed, so they brought her to a brothel, where she refused to take part in the activities there. Later, a Roman officer killed her with a sword. "Agnes" means "pure" in Greek and "lamb" in Latin, so Agnes's most common symbol is a lamb. The palm branch symbolizes martyrdom. This window is part of a larger circular window in Gesu Church in Milaukee, WI.
Posted by Sanctus Belle at 14:33 1 comment:

(photo credit)
Finally, an image of St. Thomas that is actually attractive!
January 28 is the memorial of St. Thomas Aquinas, one of the greatest theologians and philosophers of the Catholic Church. This is part of a window depicting St. Dominic receiving the Rosary (in the center), Thomas on the left, and St. Hyacinth on the right. The book he's holding translates to something like "The Word of God is not chained," from the second letter of Timothy. Does anyone know why this was important or significant in terms of Thomas? I wasn't able to find anything online about it. This window is in the Basilica of Josaphat in Milwaukee, WI.
Posted by Sanctus Belle at 14:30 2 comments:

(photo credit)
February 1 is the memorial of St. Brigid of Kildare. Many legends have arisen about her life since she died in 525. She established a nunnery at Kildare. Kildare had formerly been a pagan shrine where a sacred fire was kept perpetually burning. Rather than stamping out this pagan flame, Bridget and her nuns kept it burning as a Christian symbol. Brigid is often depicted with a flame or candle. This is a window in the Shrines of the Nations in the Cathedral of St. Paul in St. Paul, MN. This is in the Irish along with a window of St. Columba and a statue of St. Patrick.
Posted by Sanctus Belle at 14:28 No comments: 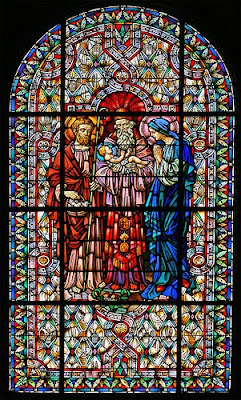 (photo credit)
February 2 is the feast of The Presentation of the Lord in the Catholic Liturgical Calendar. This window is in The Basilica of the National Shrine of Mary, Help of Christians, at Holy Hill, Wisconsin, about 30 miles northwest of Milwaukee.

Posted by Sanctus Belle at 14:23 No comments:

Our Lady of Mt Carmel and Purgatory 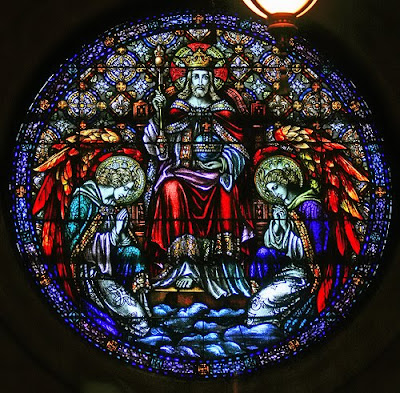 Located in the sacristy of the Basilica of St. Mary in Minneapolis, MN
Posted by Sanctus Belle at 12:42 1 comment:

(photo credit)
St. Francis Xavier Cathedral in Green Bay, WI.
We have little reliable information about this martyr, who has been honoured since ancient times, and whose name is included in the canon of the Mass. Young, beautiful and rich, Agatha lived a life consecrated to God. When Decius announced the edicts against Christians, the magistrate Quinctianus tried to profit by Agatha’s sanctity; he planned to blackmail her into impurity in exchange for not charging her. Handed over to a brothel, she refused to accept customers. After rejecting Quinctianus’s advances, she was beaten, imprisoned, tortured, her breasts were crushed and cut off with pincers. She told the judge, “Cruel man, have you forgotten your mother and the breast that nourished you, that you dare to mutilate me this way?”
Saint Peter then appeared to her and healed her. She was then imprisoned again, then rolled on live coals; another version she was rolled on broken shards of glass. When she was near death, an earthquake stuck. In the destruction that followed, a friend of the magistrate was crushed, and the magistrate fled. Agatha thanked God for an end to her pain, and died.
Legend says that carrying her veil, taken from her tomb in Catania, in procession has averted eruptions of Mount Etna. Her intercession is reported to have saved Malta from Turkish invasion in 1551.
Posted by Sanctus Belle at 12:37 No comments:

(photo credit)
Sacred Heart Catholic Church in Minto, ND.
Symbol: broken wheel
St. Catherine was a great theologian and was responsible for the converion of many through debate. She was condemned to death for her faith on the breaking wheel (an instrument of torture). According to legend, the wheel itself broke when she touched it, so she was beheaded.
Posted by Sanctus Belle at 12:32 No comments:

Sacred Heart Catholic Church in Minto, ND
Daughter of King Chilperic of Burgundy. Married young to King Clovis of the Salian Franks. Queen. Mother of three sons. Led her husband to Christianity in 496. Widow. Following Clovis’s death in 511, her sons fought for years over the kingdom. To escape the constant murder and intrigue, she retired to Tours, France where she spent her remaining 34 years caring for the poor and sick.
Buried in the church of Saint Genevieve, Paris, France
Posted by Sanctus Belle at 12:27 No comments:

Our Lady of Seven Sorrows

(photo credit)
Sacred Heart Catholic Church in Minto, ND.
Traditionally the seven sorrows, or dolors of Mary are venerated and are as follows:
1. Prophecy of Simeon
2. Flight into Egypt
3. Child Jesus lost in the temple
4. Mary meets Jesus on the Way of the Cross
5. Death of Jesus
6. Descent of Jesus from the Cross
7. Burial of Jesus
Posted by Sanctus Belle at 12:23 No comments:

The mother of Mary, St. Anne, is usually depicted instructing a young Mary.
Window in Sts. Peter & Paul Catholic Church in Strasburg, ND.
Posted by Sanctus Belle at 12:21 No comments: 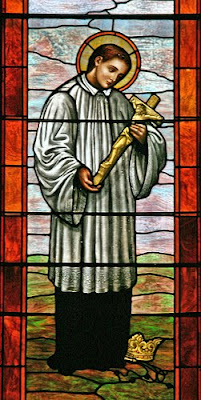 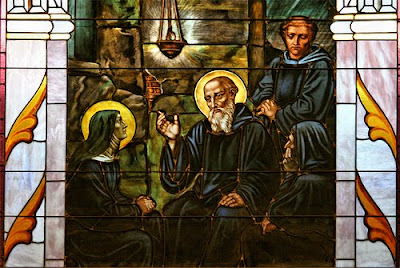 (photo credit)
February 10 is the memorial of St. Scholastica, who was the twin sister of St. Benedict of Nursia.

She was a nun and leader of a religious community of women.Wikipedia: "At the end of the day, they had supper and continued their conversation. When Benedict indicated it was time for him to leave, she protested, and begged him to stay with her for the evening so they could continue their discussions. He refused, insisting that he needed to return to his cell. At that point, Scholastica closed her hands in prayer, and after a moment, a wild storm started outside of the guest house in which they were housed. Benedict asked, "What have you done?", to which she replied, "I asked you and you would not listen; so I asked my God and he did listen. So now go off, if you can, leave me and return to your monastery."Benedict was unable to return to his monastery, and they spent the night in discussion. According to St. Gregory's Dialogues, three days later, from his cell, he saw his sister's soul leaving the earth and ascending to heaven in the form of a shining white dove."

This window is in the Church of the Seven Dolors in Albany, MN.
Posted by Sanctus Belle at 12:17 2 comments:

Our Lady of Lourdes III

Posted by Sanctus Belle at 12:15 No comments:

Our Lady of Lourdes II