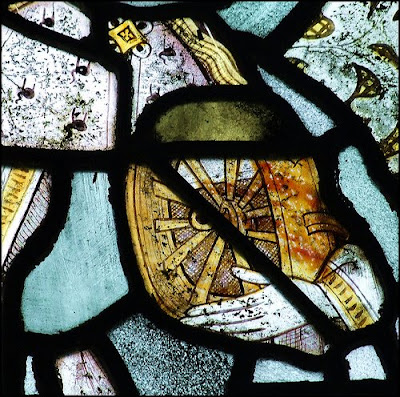 The wheel of St. Catherine of Alexandria
Church of St Mary, Gislingham, Suffolk, England
(photo credit)
A virgin and martyr whose feast is celebrated in the Latin Church and in the various Oriental churches on 25 November, and who for almost six centuries was the object of a very popular devotion.
Of noble birth and learned in the sciences, when only eighteen years old, Catherine presented herself to the Emperor Maximinus who was violently persecuting the Christians, upbraided him for his cruelty and endeavoured to prove how iniquitous was the worship of false gods. Astounded at the young girl's audacity, but incompetent to vie with her in point of learning the tyrant detained her in his palace and summoned numerous scholars whom he commanded to use all their skill in specious reasoning that thereby Catherine might be led to apostatize. But she emerged from the debate victorious. Several of her adversaries, conquered by her eloquence, declared themselves Christians and were at once put to death. Furious at being baffled, Maximinus had Catherine scourged and then imprisoned. Meanwhile the empress, eager to see so extraordinary a young woman, went with Porphyry, the head of the troops, to visit her in her dungeon, when they in turn yielded to Catherine's exhortations, believed, were baptized, and immediately won the martyr's crown. Soon afterwards the saint, who far from forsaking her Faith, effected so many conversions, was condemned to die on the wheel, but, at her touch, this instrument of torture was miraculously destroyed. The emperor, enraged beyond control, then had her beheaded and angels carried her body to Mount Sinai where later a church and monastery were built in her honour. (source) 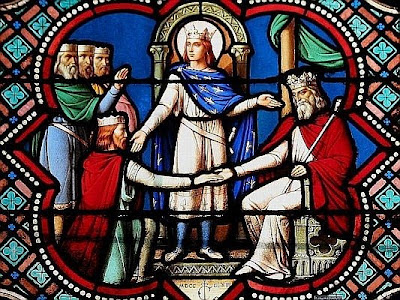 Louis IX (25 April 1214 – 25 August 1270), commonly Saint Louis, was King of France from 1226 to his death. He was also Count of Artois (as Louis II) from 1226 to 1237. Born at Poissy, near Paris, he was a member of the House of Capet and the son of King Louis VIII and Blanche of Castile. He is the only canonized King of France and consequently there are many places named after him, most notably St. Louis, Missouri in the United States. He established the Parlement of Paris. St. Louis was also a tertiary of the Order of the Holy Trinity and Captives (the Trinitarians). The General Chapter of the Trinitarian Order formally affiliated St. Louis IX to the Order in Cerfroid on June 11, 1256.

Pope Boniface VIII proclaimed the canonization of Louis in 1297. Louis IX is often considered the model of the ideal Christian monarch. Because of the aura of holiness attached to his memory, many Kings of France were called Louis, especially in the Bourbon dynasty, who directly descended from one of his younger sons. The Congregation of the Sisters of Saint Louis is a Roman Catholic religious order founded in 1842 and named in his honour. 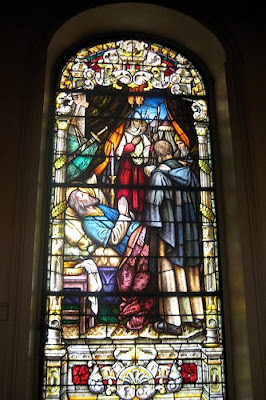 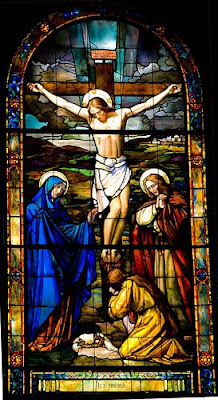 "It is finished"
Memorial Chapel at Stanford University
(photo credit)
Posted by Sanctus Belle at 04:42 No comments: 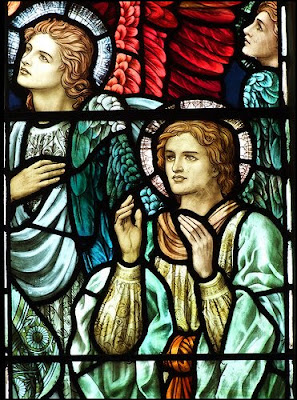 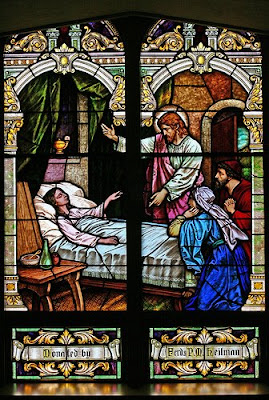 In the book of Mark, it is recorded that when Jesus reached the bedside of Jairus’ daughter, she was already dead. Those in the house summoned him away, saying it was too late. Even so, he called out to her in Aramaic, “Talitha koum!” — “My child, get up!” And she did. 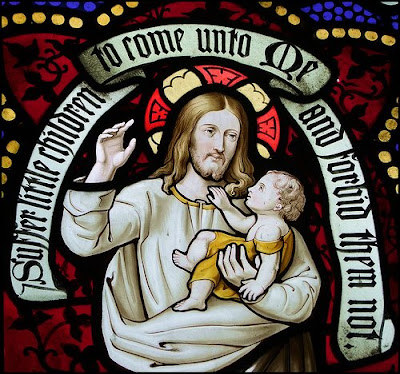 "Suffer little children to come unto Me, and forbid them not"
St Mary Magdalene, Thornham Magna, Suffolk
(photo credit)
Posted by Sanctus Belle at 04:29 No comments:

Baptism of Our Lord 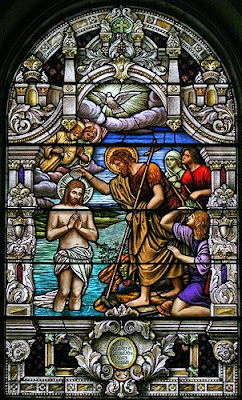 The Baptism of our Lord Jesus Christ in the Jordan River by St. John the Baptist - his cousin.

Jesus instituted the holy sacrament of baptism in this act. Through baptism every stain of sin, including original sin is washed away and we become members of His Body, that is the Holy Catholic church. 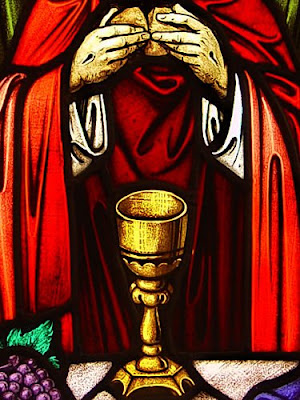 Posted by Sanctus Belle at 02:18 No comments:

Teresa of Avila is the founder of the Discalced Carmelites and one of the Doctors of the Church. Her motto was "Aut Pati, Aut Mori", or "Either to suffer or to Die", meaning "'I would rather die than cease to suffer.'
St. Francis of Assisi Catholic Church in Milwaukee, WI.
(photo credit)
Posted by Sanctus Belle at 04:21 1 comment:

St. Benedict of Nursia was the founder of several Christian monastic communities. One of his lasting accomplishments was writing the Rule of St Benedict, which became one of the most influential religious rules in Western Christendom.At one point, Benedict was the abbot of a monastery, but the monks didn't like him and tried to poison his bread, but a raven came and took the loaf away. They also tried to poison his drink, but the cup broke before he could drink it. Benedict is depicted in the stained-glass window with the raven and bread. He is alos shown with a serpent coming out of a cup, representing poison. This window is in St. Francis of Assisi Catholic Church in Milwaukee, WI.
(photo credit)
Posted by Sanctus Belle at 04:20 No comments: 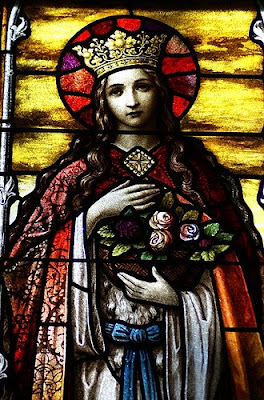 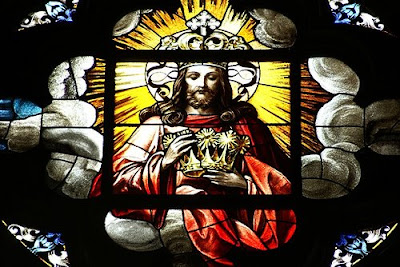 Christ the King of Heaven and Earth
Saint John the Baptist Cathedral. Savannah, Georgia
(photo credit)
Posted by Sanctus Belle at 07:00 No comments: 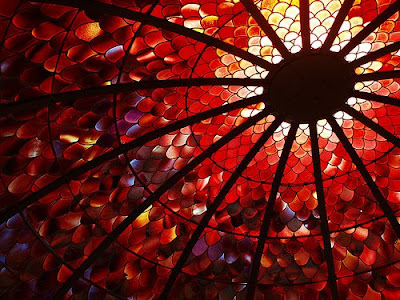 This is a detail of a glass ceiling dome for a tomb memorial - breathtaking isn't it?
"John Springthorpe's beautiful memorial to his wife, Annie (at Boroondara General Cemetery aka Kew Cemetary). Built between 1897 and 1907."...he lovingly explored the best ways to memorialise Annie, and finally decided to create a spectacular 'temple tomb' at Boroondara Cemetery, Kew.
(photo credit)
Posted by Sanctus Belle at 14:22 No comments: 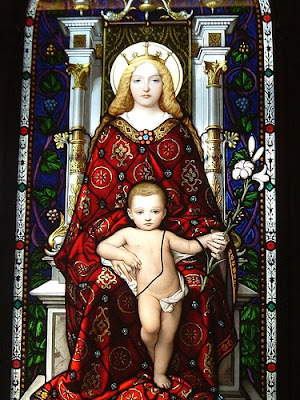 Vatican Museum
Simply perfect. Mary here look every bit the Queen of Heaven and Earth
while her Majestic infant son reposes against her knees. Perfect.

(photo credit)
Posted by Sanctus Belle at 14:04 No comments:

St. Ignatius of Loyola was the founder of the Jesuit Order.
Born in 1491 at the castle of Loyola above Azpeitia in Guipuscoa
died at Rome, 31 July, 1556
He's holding a book with the Jesuit's common symbol: IHS.
St. Francis of Assisi Catholic Church in Milwaukee, WI.
(photo credit)
Posted by Sanctus Belle at 09:54 No comments: 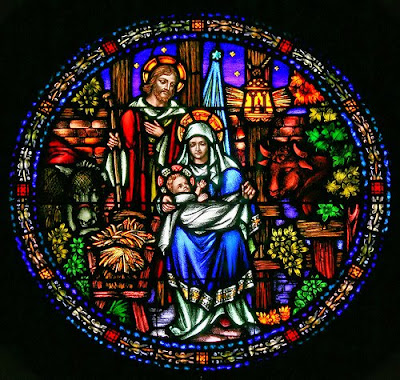 The first person to see, to touch, to love our Lord Jesus was His Holy Mother.
St. Mary's Catholic Church in Aberdeen, SD
(photo credit)
Posted by Sanctus Belle at 09:00 No comments:

Queen of Heaven and Child 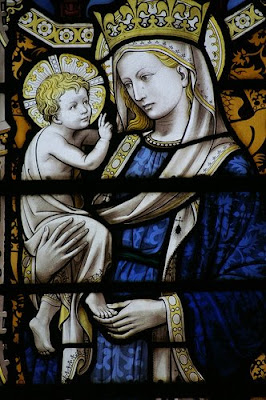 Bishop's Lydeard, Somerset England
Our Lady and the Blessed Infant, glass by Comper in the south chapel
(photo credit)
Posted by Sanctus Belle at 10:43 No comments: 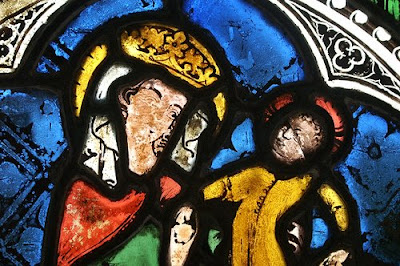 A stunning 14th century Virgin and Child,
the figures exhibiting the S-shaped posture typical of figurative work of this period.
East Hagbourne, Berkshire England
(photo credit)
Posted by Sanctus Belle at 08:04 No comments: 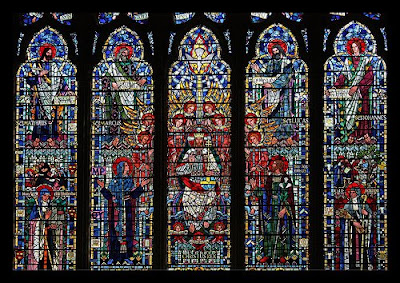 Completed in 1952, this splendid east window at St Etheldreda's Catholic church is by Edward Nuttgens. The building itself is the oldest medieval building in the City of London and was once the private chapel of the Bishop of Ely. It depicts Christ in Majesty surrounded by angels, evangelists and Ss Etheldreda, Bridget, Joseph and Our Lady.
(photo credit)

Posted by Sanctus Belle at 10:34 No comments: 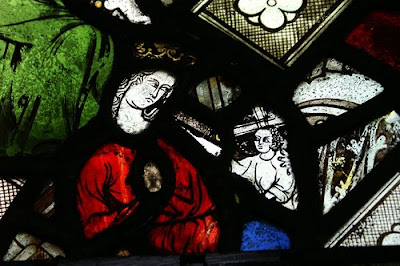 (photo credit)
Posted by Sanctus Belle at 11:00 No comments: 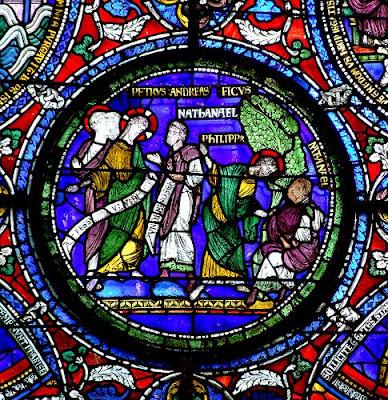 Jesus and the Apostles 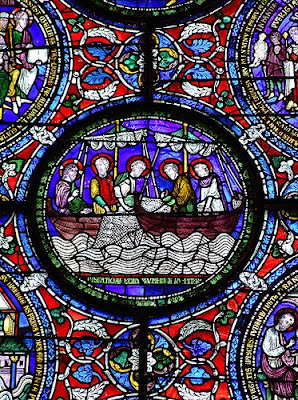