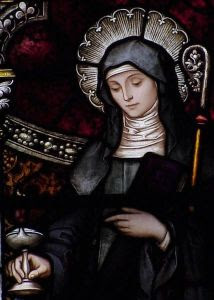 Born in 451 or 452 of princely ancestors at Faughart, near Dundalk, County Louth; d. 1 February, 525, at Kildare. Refusing many good offers of marriage, she became a nun and received the veil from St. Macaille. With seven other virgins she settled for a time at the foot of Croghan Hill, but removed thence to Druin Criadh, in the plains of Magh Life, where under a large oak tree she erected her subsequently famous Convent of Cill-Dara, that is, "the church of the oak" (now Kildare), in the present county of that name.
The most ancient life of St. Brigid is that by St. Broccan Cloen, who is said to have died 17 September, 650. It is metrical, as may be seen from the following specimen:
Ni bu Sanct Brigid suanach
Ni bu huarach im sheire Dé,
Sech ni chiuir ni cossens
Ind nóeb dibad bethath che.
Saint Brigid was not given to sleep
Nor was she intermittent about God's love;
Not merely that she did not buy,
she did not seek for
The wealth of this world below, the holy one.
Posted by Sanctus Belle at 11:29 No comments: 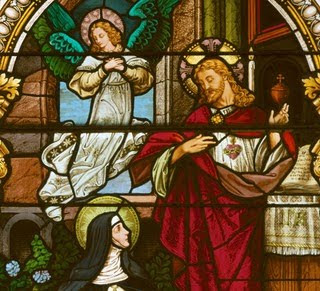 The "12 Promises"
Listed below are the "12 Promises" of theSacred Heart of Jesus to St. Margaret Mary to encourage all Catholicsto know and understand the benefit of practicing the Devotion and to encourage all to take up its immediate practice.
1. I will give them all the graces necessary in their state of life.
2. I will give peace in their families and will unite families that are divided.
3. I will console them in all their troubles.
4. I will be their refuge during life and above all in death.
5. I will bestow the blessings of Heaven on all their enterprises.
6. Sinners shall find in my Heart the source and infinite ocean of mercy.
7. Tepid souls shall become fervent.
8. Fervent souls shall rise quickly to great perfection.
9. I will bless those places wherein the image of My Heart shall be exposed and honored and will imprint My love on the hearts of those who would wear this image on their person. I will also destroy in them all disordered movements.
10. I will give to priests who are animated by a tender devotion to my Divine Heart the gift of touching the most hardened hearts.
11. Those who promote this devotion shall have their names written in my Heart, never to be effaced.
12. I promise you in the excessive mercy of my Heart that my all-powerful love will grant to all those who communicate on the First Friday in nine consecutive months, the grace of final penitence: they will not die in my disgrace, nor without receiving their Sacraments. My Divine Heart shall be their safe refuge in this last moment. (The Nine Fridays must be made in honor of His Sacred Heart, meaning, practicing the devotion and having a great love of His Sacred Heart. They must be on the first Friday of the month for nine consecutive months, and Communion must be received.)
Posted by Sanctus Belle at 11:34 No comments: 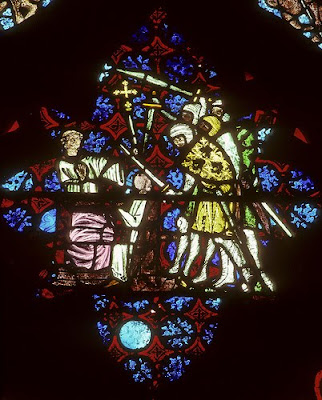 Christ Church Cathedral, Oxford England
Martyrdom of St Thomas Becket. Early 14th Century
Observations of a Monk
Edward Grim, a monk, observed the attack from the safety of a hiding place near the altar. He wrote his account some time after the event. Acceptance of his description must be qualified by the influence that Becket's sainthood had on Grim's perspective. However, the fundamentals of his narrative are no doubt true. We pick up the story after the knights have stormed into the cathedral.
"The murderers followed him; 'Absolve', they cried, 'and restore to communion those whom you have excommunicated, and restore their powers to those whom you have suspended.'
"He answered, 'There has been no satisfaction, and I will not absolve them.'
'Then you shall die,' they cried, 'and receive what you deserve.'
'I am ready,' he replied, 'to die for my Lord, that in my blood the Church may obtain liberty and peace. But in the name of Almighty God, I forbid you to hurt my people whether clerk or lay.'
"Then they lay sacrilegious hands on him, pulling and dragging him that they may kill him outside the church, or carry him away a prisoner, as they afterwards confessed. But when he could not be forced away from the pillar, one of them pressed on him and clung to him more closely. Him he pushed off calling him 'pander', and saying, 'Touch me not, Reginald; you owe me fealty and subjection; you and your accomplices act like madmen.'
"The knight, fired with a terrible rage at this severe repulse, waved his sword over the sacred head. 'No faith', he cried, 'nor subjection do I owe you against my fealty to my lord the King.'
"Then the unconquered martyr seeing the hour at hand which should put an end to this miserable life and give him straightway the crown of immortality promised by the Lord, inclined his neck as one who prays and joining his hands he lifted them up, and commended his cause and that of the Church to God, to St. Mary, and to the blessed martry Denys. Scarce had he said the words than the wicked knight, fearing lest he should be rescued by the people and escape alive, leapt upon him suddenly and wounded this lamb who was sacrificed to God on the head, cutting off the top of the crown which the sacred unction of the chrism had dedicated to God; and by the same blow he wounded the arm of him who tells this. For he, when the others, both monks and clerks, fled, stuck close to the sainted Archbishop and held him in his arms till the one he interposed was almost severed.
"Then he received a second blow on the head but still stood firm. At the third blow he fell on his knees and elbows, offering himself a living victim, and saying in a low voice, 'For the Name of Jesus and the protection of the Church I am ready to embrace death.'
"Then the third knight inflicted a terrible wound as he lay, by which the sword was broken against the pavement, and the crown which was large was separated from the head. The fourth knight prevented any from interfering so that the others might freely perpetrate the murder.
As to the fifth, no knight but that clerk who had entered with the knights, that a fifth blow might not be wanting to the martyr who was in other things like to Christ, he put his foot on the neck of the holy priest and precious martyr, and, horrible to say, scattered his brain and blood over the pavement, calling out to the others, 'Let us away, knights; he will rise no more.'
(Source)
Posted by Sanctus Belle at 09:52 No comments: 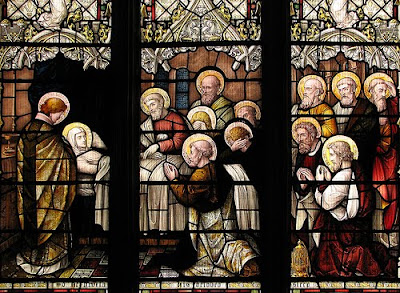 At the end of the Blessed Virgin Mary's life -

"..and she stretched her hands to heaven and prayed, saying: I adore, and praise, and glorify Your much to be praised name, O Lord, because You have looked upon the lowliness of Your handmaiden, and because You that are mighty has done great things for me; and, behold, all generations shall count me blessed. Luke 1:48 And after the prayer she said to the apostles: Cast incense, and pray. And when they had prayed, there was thunder from heaven, and there came a fearful voice, as if of chariots; and, behold, a multitude of a host of angels and powers, and a voice, as if of the Son of man, was heard, and the seraphim in a circle round the house where the holy, spotless mother of God and virgin was lying, so that all who were in Bethlehem beheld all the wonderful things, and came to Jerusalem and reported all the wonderful things that had come to pass. And it came to pass, when the voice was heard, that the sun and the moon suddenly appeared about the house; and an assembly of the first-born saints stood beside the house where the mother of the Lord was lying, for her honour and glory. And I beheld also that many signs came to pass, the blind seeing, the deaf hearing, the lame walking, lepers cleansed, and those possessed by unclean spirits cured; and every one who was under disease and sickness, touching the outside of the wall of the house where she was lying, cried out: Holy Mary, who brought forth Christ our God, have mercy upon us."

Excerpt from the Account of St. John the Theologian of the Falling Asleep of the Holy Mother of God. Full text HERE
Posted by Sanctus Belle at 08:57 No comments: 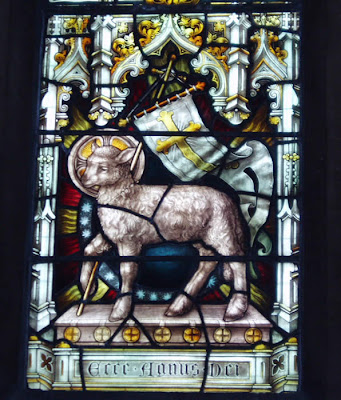 Angus Dei or Lamb of God
at St John's, Hills Road, Cambridge
"The next day John seeth Jesus coming unto him, and saith, Behold the Lamb of God, which taketh away the sin of the world." John 1:29
Posted by Sanctus Belle at 09:11 No comments:

Why are you sleeping? 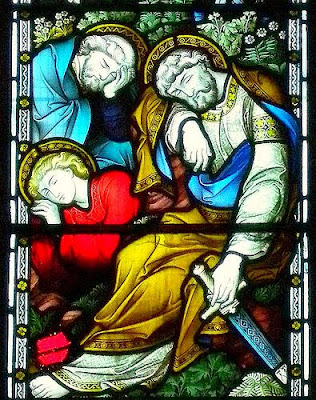 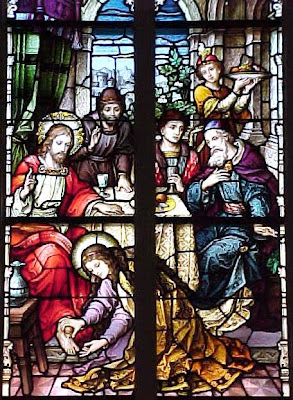 "Jesus therefore, six days before the pasch, came to Bethania, where Lazarus had been dead, whom Jesus raised to life. And they made him a supper there: and Martha served: but Lazarus was one of them that were at table with him. Mary therefore took a pound of ointment of right spikenard, of great price, and anointed the feet of Jesus, and wiped his feet with her hair; and the house was filled with the odour of the ointment. Then one of his disciples, Judas Iscariot, he that was about to betray him, said: Why was not this ointment sold for three hundred pence, and given to the poor? Now he said this, not because he cared for the poor; but because he was a thief, and having the purse, carried the things that were put therein. Jesus therefore said: Let her alone, that she may keep it against the day of my burial. For the poor you have always with you; but me you have not always." John 21: 1-8
Posted by Sanctus Belle at 08:53 No comments: 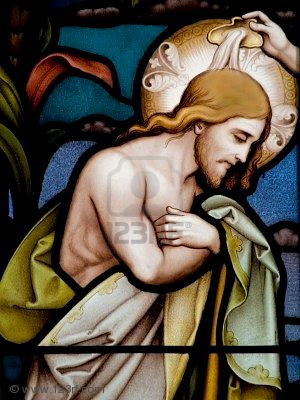 by His cousin St. John

Posted by Sanctus Belle at 14:43 No comments: 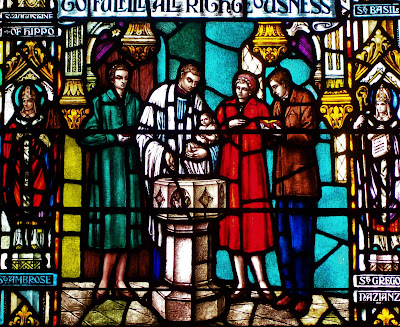 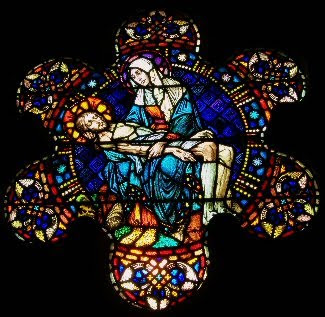 Posted by Sanctus Belle at 14:24 No comments: