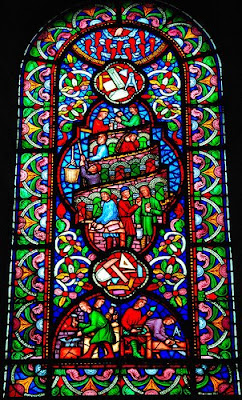 Below is a partial caption from the photographer:
"The story of Ely Cathedral begins in Saxon Times with the life of its founder,St. Etheldreda.St. EtheldredaEtheldreda (Æthelthryth, Ediltrudis, Audrey) (d.679), queen, foundress and abbess of Ely. She was the daughter of Anna, king of East Anglia, and was born, probably, at Exning, near Newmarket in Suffolk. At an early age she was married (c.652) to Tondberht, ealdorman of the South Gyrwas, but she remained a virgin. On his death, c.655, she retired to the Isle of Ely, her dowry. In 660, for political reasons, she was married to Egfrith, the young king of Northumbria who was then only 15 years old, and several years younger than her. He agreed that she should remain a virgin, as in her previous marriage, but 12 years later he wished their marital relationship to be normal. Etheldreda, advised and aided by Wilfred, bishop of Northumbria, refused. Egfrith offered bribes in vain. Etheldreda left him and became a nun at Coldingham under her aunt Ebbe (672) and founded a double monastery at Ely in 673. (from FARMER, David: The Oxford Dictionary of Saints, 3rd ed. OUP, 1992.)Etheldreda restored an old church at Ely, reputedly destroyed by Penda, pagan king of the Mercians, and built her monastery on the site of what is now Ely Cathedral. After its restoration in 970 by Ethelwold it became the richest abbey in England except for Glastonbury.Etheldreda's monastery flourished for 200 years until it was destroyed by the Danes. It was refounded as a Benedictine community in 970. Etheldreda died c.680 from a tumour on the neck, reputedly as a divine punishment for her vanity in wearing necklaces in her younger days; in reality it was the result of the plague which also killed several of her nuns, many of whom were her sisters or nieces. At St Audrey's Fair necklaces of silk and lace were sold, often of very inferior quality, hence the derivation of the word tawdry from St Audrey.17 years after her death her body was found to be incorrupt: Wilfred and her physician Cynefrid were among the witnesses. The tumour on her neck, cut by her doctor, was found to be healed. The linen cloths in which her body was wrapped were as fresh as the day she had been buried. Her body was placed in a stone sarcophagus of Roman origin, found at Grantchester and reburied.For centuries, Etheldreda's shrine was the focus for vast numbers of medieval pilgrims. It was destroyed in 1541, but a slate in the Cathedral marks the spot where it stood, and the 23 June and 17 October are still kept as major festivals in the Cathedral. Some relics are alleged to be in St Etheldreda's Church, Ely Place, London (where the bishops of Ely formerly had their London residence). Her hand, which was discovered in a recusant hiding place near Arundel in 1811, is claimed by St Etheldreda's Roman Catholic church at Ely"
Posted by Sanctus Belle at 16:29 No comments: 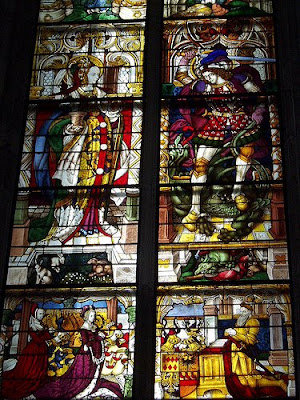 (photo credit)
Detail of the early 16th century glazing of the north nave aisle of Cologne Cathedral
Posted by Sanctus Belle at 04:26 No comments:

Descent from the Cross 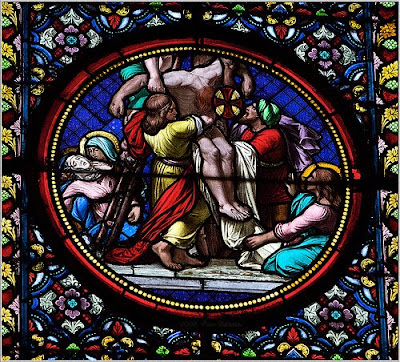 (photo credit)
Christ's descent from the Cross, Sainte Clotilde church, Paris France
Our Lord Jesus Christ was taken down from the cross, His holy Altar of Sacrifice and placed in the arms of His holy Mother who suffered sorely in affliction for our sins.
Posted by Sanctus Belle at 04:22 No comments: 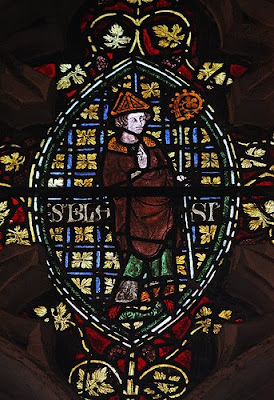 Early 14th-century detail from Christ Church Cathedral, Oxford, of St Blaise, whose feast is 3 February. St Blaise, who was bishop of Sebaste and persecuted and executed by Licinius in 316, is one of the Fourteen Holy Helpers and famed for many miracles and wonders. According to tradition, on one occasion, a woman whose boy was dying because a fish bone had stuck in his throat, came to St Blaise and laid the boy at his feet, tearfully begging him to cure her child. St Blaise promptly laid his hands on the boy and prayed that this child, and anyone else who sought help from God in his name, should obtain the benefit of health. The boy was cured instantly and to this day, St Blaise remains a worthy help in cases of throat ailments.For centuries now, the Church has attributed to this fourth-century Armenian bishop and martyr, protection from throat ailments. Two candles are blessed and then held saltire (often tied in this position with red ribbon) and placed on the throat of the devotee as the priest prays the prayer of the blessing of throats, that God will free from all afflictions of the throast and other ills those who place themselves under the protection and intercession of St Blaise.
Posted by Sanctus Belle at 04:19 1 comment: 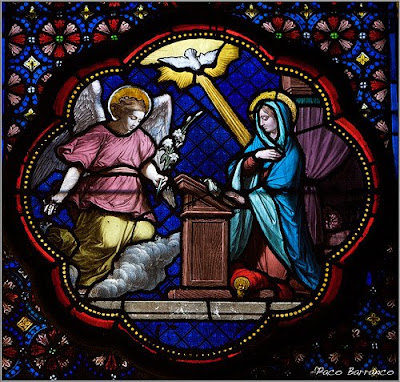 (photo credit)
"Hail! Full of Grace, the Lord with with thee!" ~Gabriel to Mary
This did the Lord reveal to us the name He bestowed upon Mary, "Full of Grace" which means there is nothing within her soul besides grace. She lived her entire life from the moment of her conception free from all stain of sin, including original sin and thus was perfectly conformed to the will of God.
"Behold the Handmaid of the Lord, may it be done unto me according to your word." Mary's response to Archangel Gabriel
Posted by Sanctus Belle at 04:13 No comments: 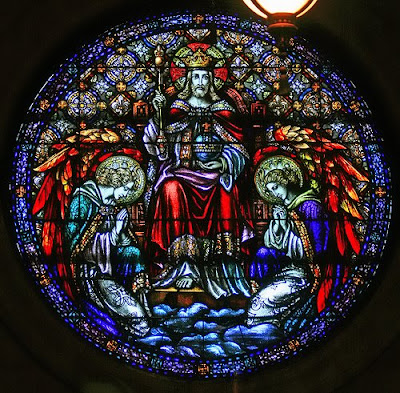 This one comes to us from the Basilica of St. Mary in Minneapolis MN, USA. I have been to Mass many times here and in fact had an extraordinary conversion experience in this fine church while on my knees before the Blessed Sacrament on a Good Friday. May the Lord upon His lofty throne be praised forever amen!
Posted by Sanctus Belle at 16:02 No comments: 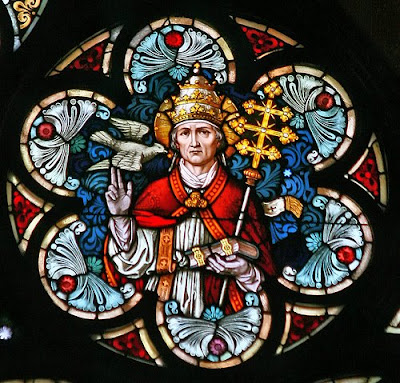 The following is the caption from the photographer regarding the person here depicted:

"The guide/pamphlet for Gesu Church in Milwaukee, WI indicates this is St. Leo the Great, but I think it might be St. Gregory the Great. One of Gregory the Great's common symbols is a dove whispering into his ear. I wasn't able to find any references to a bird or dove being a symbol of Leo the Great. The tiara could be associated with either Gregory or Leo, but a double cross is usually seen with Gregory and a triple cross with Leo, so that doesn't help my argument much."
Posted by Sanctus Belle at 15:58 No comments: 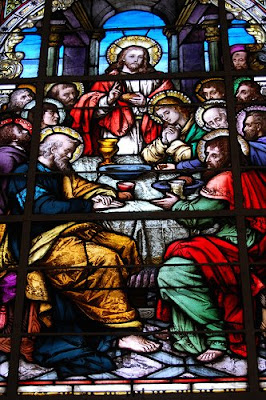 (photo credit)
"This is the cup of My blood" ~Jesus the Lord
Built in 1793, theWaterford Cathedral is Ireland's oldest Catholic Cathedral
Posted by Sanctus Belle at 03:55 No comments: 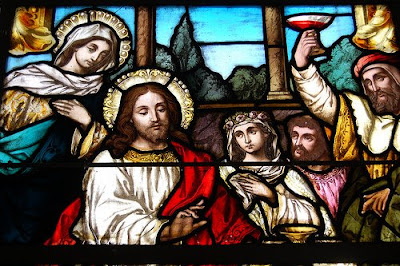 Posted by Sanctus Belle at 03:24 No comments: 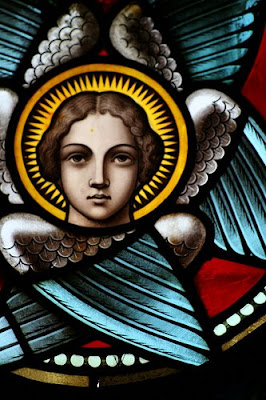 I place my whole self Lord,
within the spear wound of thy Sacred Heart,
there awaiting all of your Divine Mercy!
Amen+
St. Edward's Catholic Church in Drayton, ND
(photo credit)
Posted by Sanctus Belle at 09:32 1 comment:

Posted by Sanctus Belle at 09:13 No comments:

(photo credit)
Here is the associated caption for this beautiful picture.
"Church Tradition teaches that St Paul suffered martyrdom in Rome and was beheaded, whence the sword is his symbol.According to Eusebius: "When the government of Nero was now firmly established, he began to plunge into unholy pursuits, and armed himself even against the religion of the God of the universe... Thus publicly announcing himself as the first among God's chief enemies, he was led on to the slaughter of the apostles. It is, therefore, recorded that Paul was beheaded in Rome itself, and that Peter likewise was crucified under Nero. This account of Peter and Paul is substantiated by the fact that their names are preserved in the cemeteries of that place even to the present day.This is one of the scenes from the window of St Paul's life in Melton Mowbray."

Posted by Sanctus Belle at 11:40 No comments:

"Thou art Peter, upon this rock I shall build my church" ~Jesus
St. Edward's Catholic Church in Drayton, ND.
(photo credit)
Posted by Sanctus Belle at 09:29 No comments:

I would like to thank Vincenzo at Sancte Pater blog for my new beautiful header! He does such great work. He also made the nice header for my other blog Our Lady's Tears.
Posted by Sanctus Belle at 09:28 1 comment: 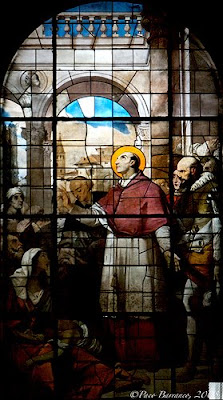 St. Charles Borromeo Bishop of Milan from a church in Milan
(photo credit)
St. Charles Borromeo, one of my patron saints, was Archbishop of Milan, Cardinal-Priest of the Title of St. Prassede, Papal Secretary of State under Pius IV, and one of the chief factors in the Catholic Counter-Reformation -- was born in the Castle of Arona, a town on the southern shore of the Lago Maggiore in northern Italy, 2 October, 1538; died at Milan, 3 November, 1584. His emblem is the word humilitas crowned, which is a portion of the Borromeo shield. He is usually represented in art in his cardinal's robes, barefoot, carrying the cross as archbishop; a rope round his neck, one hand raised in blessing, thus recalling his work during the plague. His feast is kept on 4 November.
St. Charles Borromeo - Ora pro nobis!
Posted by Sanctus Belle at 04:47 No comments: